Quist, Fitzpatrick & Jarrard, PLLC is the successor and legacy to one of Knoxville’s oldest law firms. In 2013, the firm changed its name from Jenkins & Jenkins, PLLC. Previous to that, the firm was known as Jenkins & Jenkins, a partnership that was established in 1933 by Ray H. Jenkins and Erby Jenkins.

Ray Jenkins (1897- 1980) was raised in Tellico Plains, Tennessee. He became an attorney of considerable notoriety in the field of criminal defense, in later years mostly murder and other capital cases. His courtroom demeanor became legendary in East Tennessee. When trying a case, many would come to the courthouse just to hear him speak. In 1954, he received national recognition when he was appointed special counsel to the United States Senate committee to conduct the investigation into Senator Joe McCarthy’s alleged transgressions with the department of the Army in what became known as the Army-McCarthy hearings. Mr. Jenkins’ was featured on the cover of Time Magazine.

Mr. Jenkins’ rather enlightening autobiographical work, “The Terror of Tellico Plains,” serves as great reading for attorneys. In his honor, the firm sponsors the Ray Jenkins Trial Competition at the University of Tennessee College of Law, which has been conducted annually since 1985. 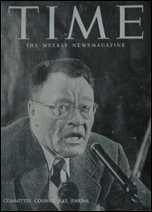 Erby Jenkins (1907-1990) was a highly regarded and most likeable attorney. Erby Jenkins was active in the local, state, and national bar associations. Erby Jenkins served as president of the Tennessee bar association in 1956 and on the Board of Governors for the American Bar Association from 1972-1975. He served as special associate justice on the Tennessee Supreme Court in 1965. Though having the same last name, Erby and Ray Jenkins were not related, but were indeed life-long friends.

Located in beautiful downtown Knoxville, the firm has been at the same address in the First Tennessee Plaza since 1979.